Chennai port is second largest and third oldest port in India. It is considered as a big hub for cargo traffic, car, big containers in east coast of India. Chennai port is known for its Coastal breakwater, artificial, large seaport type of harbor. Cochin port is situated in state of Kerala in India and considered to be one of the largest port between Indian Ocean and Arabian Sea. This port is equipped with maritime facilities. Jawaharlal Nehru port is the largest container port in India and is also known by Nhava Sheva. It is situated in Maharashtra (Mumbai). It accounts for more than half of total container volumes handled at India’s 12 public ports and around 40 percent of the nation’s overall containerized ocean trade. 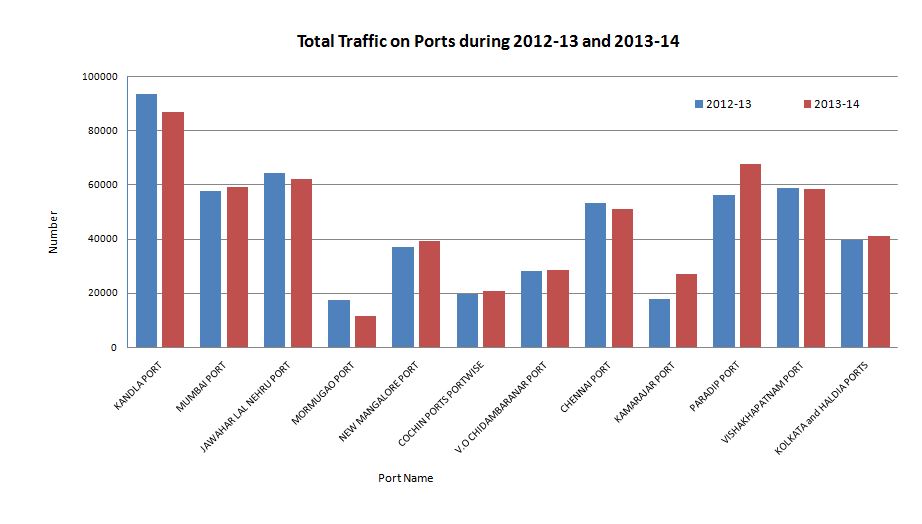 Kamarajar Port located in Chennai (Tamil Nadu) was earlier known by Ennoreport. It is the twelfth major port in India, and is the first port which is owned by a public company. Kandla port in Gujarat is one of the major ports on the west coast region.It is considered to be the largest port of India by volume of cargo handled. Kolkata port was constructed by the British East India company . It is the oldest operating port in India. The port has two distinct dock systems – Kolkata Docks at Kolkata and a deep water dock at Haldia Dock Complex, Haldia. The Mormugao port in Goa, bestowed the status of a Major Port in 1963, the Mormugao port has contributed to growth of maritime trade in India. It is the leading iron ore exporting port of India.

Mumbai port earlier known as Bombay port, it is situated in west Mumbai (Maharashtra). It is also currently owned by Government of India. This port is used for bulk cargo. New Mangalore port is situated in Mangalore (Karnataka), it is currently owned by Ministry of Shipping, Government of India and is operated by new Mangalore port trust. This port mainly deals in the trade of logistical services, Shipping and storage etc. The Port is well equipped to handle bulk, hazardous cargos , crude and POL products , liquid chemicals, heavy lifts, machinery, containers. Paradip port is located in Jagatsinghpur, Odisha. This port is operated by Paradip Port Trust( PPT) which is an autonomous body and is wholly owned by Government of India. V.O Chidambaranar Port also known as Tuticorin Port located in Tamil Nadu . It is the second largest port in Tamil Nadu and has fourth largest container terminal in India. It deals mainly in Fertiliser, Timber logs, iron ore, industrial coal, Copper concentrate.Visakhapatnam port is one of the major port of Andhra Pradesh and considered second largest port by volume of cargo handled. It is operated by Visakhapatnam Port Trust, owned by Government of India.

The Ministry of Shipping has shared the Major Ports data on data portal (https://data.gov.in) which can be followed at :