Home » Infographics » Impact of education on economic growth and earnings

Impact of education on economic growth and earnings

In the modern era, global economy is very much dependent on the advanced technology, where considerable emphasis is placed on the contribution made by human resources, or you can say the human capital, to economic growth. The principle is that the relative contribution of every individual to the economic growth depends on their human capital – the education, knowledge, skills, competencies and other attributes that are relevant to economic activity.
As a consequence, developing the skills and knowledge of the labor force is regarded as a key strategy for promoting national economic growth. Looking at the macroeconomic level, a number of researchers across the globe, have looked specifically on the effect of literacy on the economic growth, for example Green and Riddell (2003) found that literacy and schooling each influence individuals’ earnings. Sum (1999) also found independent contributions of adult literacy and educational attainment on individuals’ employment and earnings.
Though many extraneous Variables may have influence on the growth of economy, but there is ample anecdotal and 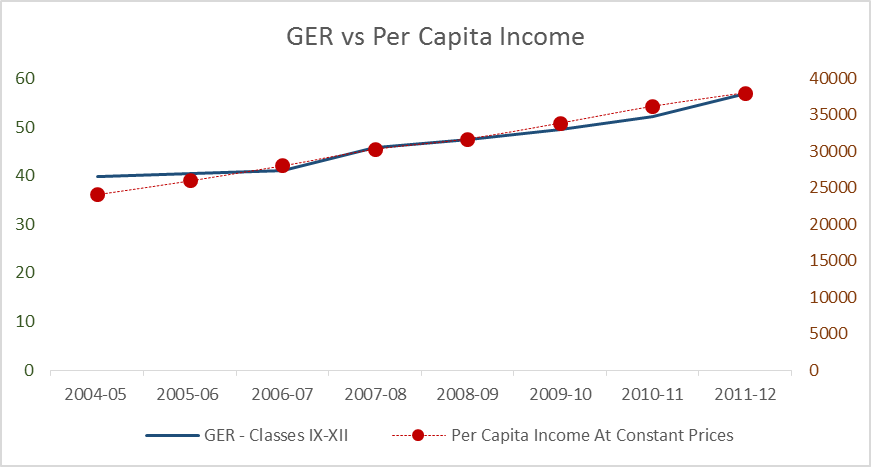 correlational evidence suggesting that education and economic growth are related, but the evidence points in a variety of directions attainment levels. During 2004-2012 Gross enrolment ratio (GER) in Classes IX-XII has sharply increased by 42% from 39.9 in 2004-05 to 56.8 in 2011-12 and per capita income at constant prices has also sharply increased by 58% from 24143 in 2004-05 to 38048 in 2011-12. (source : https://data.gov.in/catalog/gross-enrolment-ratio-ger#web_catalog_tabs_block_10 and https://data.gov.in/catalog/capita-income-all-india-and-madhya-pradesh#web_catalog_tabs_block_10 ).Increases in skill levels are linked to increase in incomes. For example, improved education can be associated with higher earnings and lower poverty rates.

Percentage of population Below Poverty Line 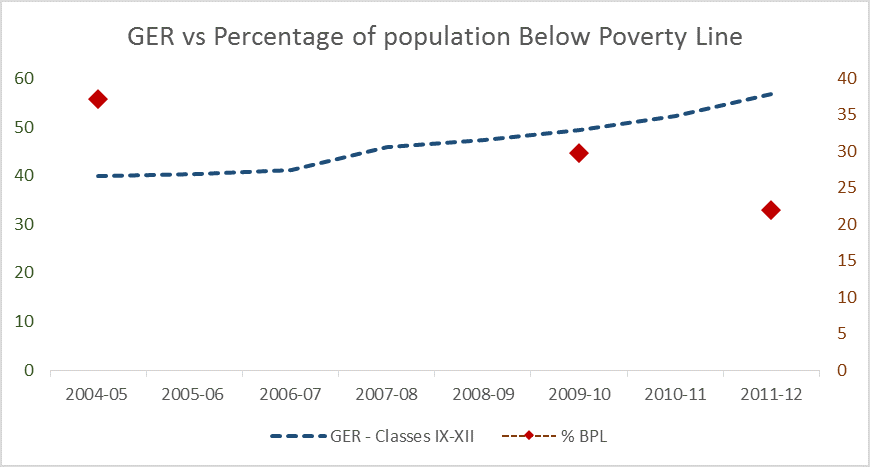 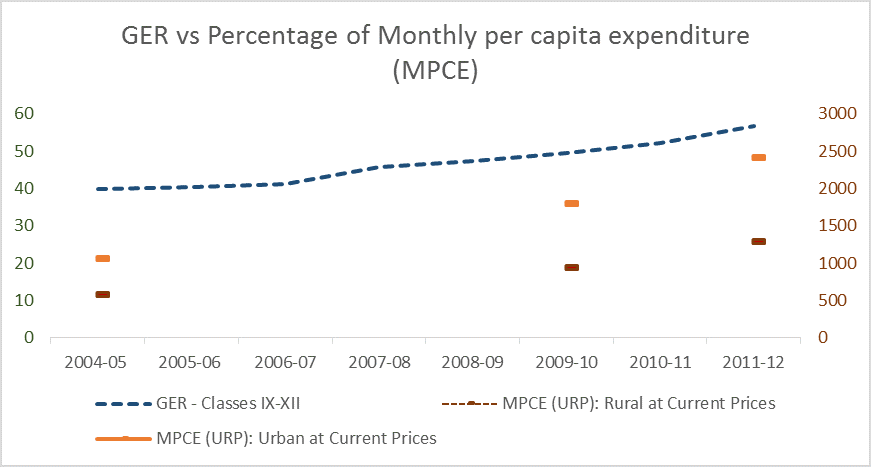 During this period, monthly per capita expenditure (MPCE) (Uniform Reference Period) – Urban and Rural have increased by 129% and 128% respectively. It’s truer that in the population, better employment prospects and the increasing earnings that come with higher educational attainment can all contribute to growth and prosperity.Further analysis and research could deepen understanding of these fairly substantial effects. It could be, for example, that growth in literacy proficiency is a proxy for important omitted variables that influence the rates of both literacy and income.

Understanding the components that contribute to economic growth of a country was always a hot cake of discussions of economists. Most developed economies, has evolved from one based on resources and manufacturing to one based on information, knowledge and skills, growing emphasis has been placed on the role played by human capital – the skills and knowledge embodied in people. Because direct measures of skill have been hard to develop, analysts have relied on indirect measures of human capital, based on the assumption that individuals with more education will also have more knowledge and skill than those with less education.

Today, the data clearly tell us that the closest thing a country has to a silver bullet for creating a successful 21st century economy and an improved quality of life—better health, lower crime, citizens who contribute—is a dramatic increase in the number of college educated people in its workforce age population.
It is past time to ready ourselves for the global challenge, be determined to reach goal of increased education attainment and economic development that will secure our future.