The utility of technology in a smart city cannot be questioned, as it can be used to solve numerous issues that cities focus on today. However, a city is for its citizens, and ignoring their views and tendencies is a fatal flaw. Implementing the most modern and the most utilitarian solutions in the city may end up being completely pointless if the citizens do not need or appreciate it. Furthermore, IoT and sensors can keep AMC informed about necessary maintenance, but that does not mean that the voice of citizens not be heard.

The first step towards engaging citizens with the city is having a robust, accessible, and reliable citizens’ grievance/complaints redressal system. Using technology to set up online infrastructure for the same is the project implemented by AMC.

The Comprehensive Complaint Redressal System (CCRS) is a web-based enterprise solution that allows Ahmedabad Municipal Corporation to enhance citizen satisfaction through comprehensive service management and efficient service delivery. CCRS automates entire complaint process, right from registration to closure. It also enforces service level policies to ensure the complaint gets attended within desired timeline or gets escalated to higher authorities for their attention and intervention.

Complaints are all logged onto a single centralized platform, and concerned parties and authorities are constantly in the loop with it – ensuring quick redressal (which is also enforced, as complaints must be addressed in a stipulated period). For AMC, the complaints received are bucketed zone-wise, and within each zone, complaints are further segregated department wise and ward-wise. This categorization is greatly beneficial in simplifying governance and enhancing administrative convenience. The complaints reach the right zone, right ward and department in-charge without fail.

AMC CCRS app has also been launched in March 2019 to introduce yet another avenue for citizens. AMC aims to establish itself in a position where citizens feel that the Corporation “always listens”. Making it possible for citizens to reach out to AMC beyond the numerous formal channels of CCRS; such as via Facebook, Twitter, etc. is the aim.

A dashboard and insights engine are designed into the CCRS, so that data such as frequent complaints, average turnaround times of certain complaints, and so on, are used to identify focus areas for the AMC. This helps AMC prioritize its resource deployment, service provision, and budget; all with the citizens’ voice as the driving force.

All these complaints, irrespective of the mode of registration, are logged onto a central system. Complaints are thus not lost in the system. The complainant gets instant acknowledgement, while the CCRS assigns specific officers to address the reported problem. The officer is expected to resolve the complaint in a specified duration of time. An escalation scale for the problem has also been defined, and it is implemented on the CCRS. If the complaint is not addressed satisfactorily, the citizen can reopen complaints marked closed by the officer, and they are escalated to a higher authority.  Therefore, the citizen knows at all times the status of his complaint. Thus, the process is very simplified for them, and the onus on the officials to ensure that the citizen is satisfied. 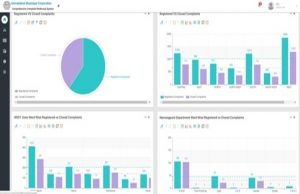 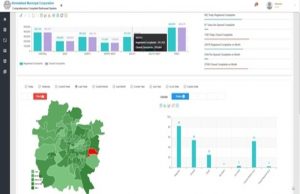 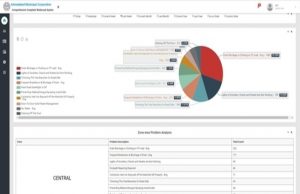 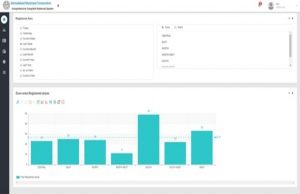 Based on reports generated the data analyst reports the status to concern officials and decision making take place with corrective actions.

The CCRS has been successful in its endeavors to engage with the citizens of Ahmedabad. To-date, the CCRS has registered over 18.5 lakh complaints across its several communication channels, and an average of 900-1000 complaints are handled on a daily basis.

The citizens have been adequately made aware of the ways in which they could reach out to AMC and report shortcomings in any of the city’s services or infrastructure, which the number of complaints reflect. Also, AMC has been proactive in addressing these complaints. Apart from proactive governance, the CCRS with its features facilitating administrative convenience has made this possible. For the period April 2018 to March 2019, for instance, 3,15,874 complaints have been addressed and closed out of the 3,16,714 received; representing a 99.7% redressal rate.

As it gets easier for citizens to report issues, they are prompted to do so sooner, more often, and without hesitation. As AMC receives these complaints quickly and is able to systematically address them at once, the issues are resolved quicker. With the actionable insights, AMC can be more proactive and identify and address key areas of improvement even before they are reported, thereby enhancing the quality of governance. All in all, this virtuous cycle moves Ahmedabad towards being the best city for its citizens; which, after all, is the ultimate objective of the Smart City initiative.