Home » Infographics » Trade off between Unemployment and Inflation in India

Trade off between Unemployment and Inflation in India

Monetary policy of a country has a short term impact on inflation and the economy-wide demand for goods and services. Hence, the demand for the human resources who produce those goods and services also fluctuates. When monetary policy is used to reduce inflation, countries face problems to control unemployment. This scenario was well explained by economist A. W. Phillips in 1958, where he showed that when inflation is high, unemployment is low, and vice versa. This relationship is now well known as the Phillips curve. If an economy experienced inflation, monetary policy is used to curve the inflation down, either by contracting the money supply or by raising the interest rates, higher interest rates reduce consumer spending and investment leading to lower aggregate demand, while aggregate supply remains the same. With the fall of aggregate demand, inflation would decline. However, if there is a decline in Real GDP, firms will employ fewer employees leading to a rise in unemployment.

In the Indian scenario, let’s take a look at the relationship between inflation and 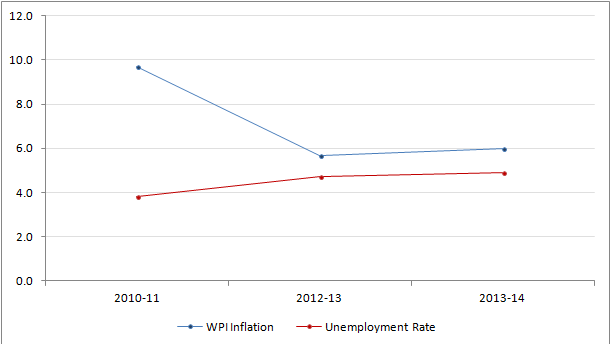 unemployment and see if we can find the Phillips Curve at work, for this purpose we have studied data points of just 3 years (2010-11, 2012-13, 2013-14, the data points of 2011-12 have not been considered due to unavailability of unemployment rate in Labor bureau of India). 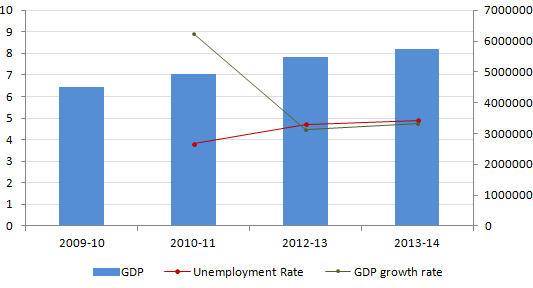 In some periods , It is also possible to have a rise in both inflation and unemployment. For example, inflation rate increased from 5.7% in 2012-13 to 6% in 2013-14, and during this period unemployment have also increased from 4.7% to 4.9%. This implies that it can happen due to cost-push inflation, the aggregate supply curve would shift and there would be a fall in economic activity and higher prices. However, we could debate this by the Monetarist view, but there can be still a trade off. If the RBI sought to reduce the cost-push inflation through higher interest rates, they could. However, it would lead to an even bigger rise in unemployment.
By plotting these points on a graph, we can see the normal Phillips curve (unemployment vs Inflation), which is downward sloping with 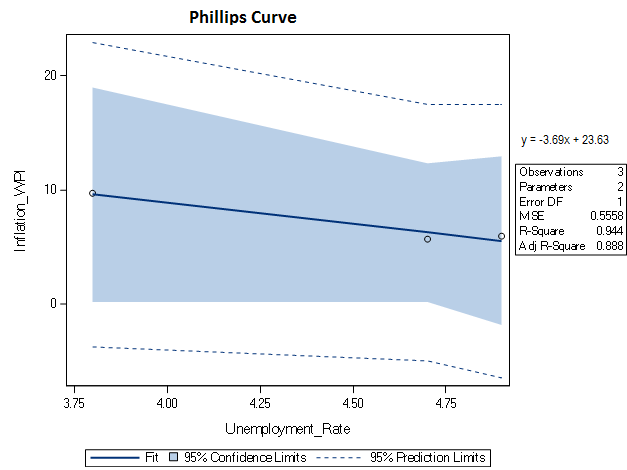 But, we would not get a regular Phillips curve in India because we have to adjust for exogenous factors,some of the studies i.e Paul (2009) , Patra and Ray (2010) , Manoj Kumar (2012) etc. suggest that extended Phillips curve model can be applicable for India.