Surat Municipal Corporation (SMC) had inaugurated BRTS service in January 2014 with 10.3 km of stretch and expanded to 117 km (108-closed system) network with 166 bus on 12 routes. After that in November 2016, Surat Municipal Corporation inaugurated Surat city bus service and expanded to 491 km of network in SMC and Surat Urban Development Authority (SUDA) with 575 buses on 45 routes. It is important for any public transport service to have properly designed bus schedules as it improves the level of service offered to passengers while minimising operational cost for operators. The scheduling process involves assigning a set of trips to a set of buses based on the trip starting time, such that the sequence of the trips for each bus is time feasible. With Vehicle Planning and Scheduling (VPS) system, the city would be able to develop the following: 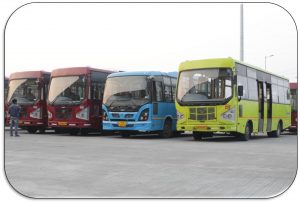 Surat uses scheduling tool to analyse the daily ridership and schedule details and to improve when required. The routes and schedules are analysed for each hour of the day, to days across the week with respect to their indicators. This enables the Corporation to allocate the buses as per the passenger demand improving level of service for the commuters.  The schedules are prepared based on real-time data and past data which has improved reliability on public transport service. 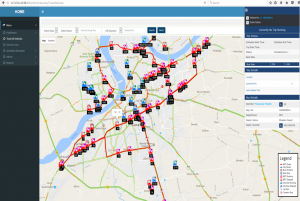 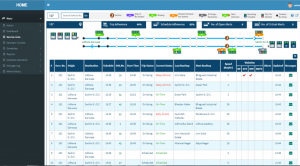 The success of the pilot has resulted in citizens accepting public transport system and transfer facility between services. Approx. 35-40% of daily passengers are travelling to their destination using interchange within service or between services. Overall, VPS system has helped to increase Public transport user’s satisfaction level and their faith in system and services provided by the Corporation.

The pilot was carried out on BRTS and city bus routes. The route-wise ridership data and schedule data was analysed for each hour to understand the load factor and Origin – Destination patterns on the routes. Based on the analysis, bus schedule was changed and City bus-route was curtailed for specific time duration (off-peak hours) as there was no passenger demand. This led to a total saving of 407 km/day amounting to savings of Rs. 43.9 lacs/year. In second case, the dead km was optimized by reallocation of buses from depot which resulted into savings of Rs.62.78 lacs/year. VPS also helps when the routes are being diverted due to any kind of work going on the city. The passenger load assessment helps the organization to reschedule the buses. In one such similar case, the savings of Rs. 22.4 lacs/ year were done. The analysis of complete system led to savings of lakhs of kilometres and fuel per month, which will eventually lead to saving on operational costs and improvement in the environment of the city.

The software is able to integrate with existing Intelligent Transit Management System (ITMS) and Automated Fare Collection System (AFCS). The current stop and depots, lines and routes information, travel time incorporations, Fare and OD matrix, Depot Management System would be able to get integrate with these components leading to smart transport enterprise. The integration of existing ITMS and AFCS system with the VPS software has improved the ability to prepare schedule based on the actual data, such as actual travel time during peak and off-peak hour with total ticketing data hour-wise. User Satisfaction survey of public transport users was carried out and the commuters were asked about the mode, which they used before they started using city bus. This helped in assessment of the modal shift and carbon emissions. The result showed that approximately 86.91% of Auto-Rickshaw users have shifted to city bus, two wheelers (6.18%), cars (0.65%), BRTS (0.78%), NMT (0.52%), old city bus (0.39%) and others (4.56%). Because of this modal shift there are savings of 28% of GHG emissions. Environmental impacts envisaged upon network expansion and increase in ridership and modal shifts. VPS tool has improved the schedule preparation process which, in turn has improved the reliability and efficiency of operations and work force for Surat bus operations.

Currently, BRTS service is operational on 12 routes and city bus service is operational on 45 city bus routes with total network of 490 km and having population coverage of 95%. The city bus service was extended on important nodes outside city limits from where commuters travel to and from daily, for work.  The city bus service is also extended to 35 out of 41 villages currently with population of more than 5,000 persons. There are many villages that are dependent on Surat city but due to their distance from city, it is not feasible to provide service to those areas. However, in near future, based on requirement and availability of buses, city will expand its public transport service to those villages. At present, Sitilink is using VPS system with capacity of 750 buses. However, due to high demand city will require more number of buses in future and VPS system with 750+ buses scheduling capacity will be required. 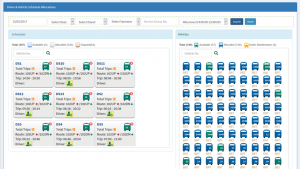 System wide impacts include relief from congestion, improved safety, improved environment, maximization of the ridership, serving the needs of the poor, to provide opportunities for transit-oriented development/ promote compact city and enable integration with other modes.