Bhopal, a city that has urbanized rapidly in recent years, has witnessed enormous growth in traffic volumes which have, resulted in several traffic problems in and around the city, such as traffic jams, increase in number of road accidents etc. Traffic congestion is a threat to the economic, environmental, social and sustainable development of a city and traffic management has always been an issue of concern for urban policy makers. Thus, the need of the hour is to reshape the transportation networks taking into account the rise in motorized vehicles as well as the aging and sub-optimal infrastructure available in Indian cities.

A need was felt to develop a smart traffic management system, which would aim at improving the efficiency and effectiveness of the traffic on city roads. As part of smart city initiatives, Bhopal Smart City Development Corporation Limited (BSCDCL) has taken up project for Smart traffic management – Integrated Traffic Management System (ITMS) which provides greater information to the authorities to proactively manage the ongoing traffic situation in the city. Free flow of traffic guided by various traffic apps, smart sensors, ensure shorter travel times, increased safety and security along with reduced emissions and noise. Technology equips transportation system to send right information at right time to traffic planners and commuters. Real-time data available about traffic on roads and congestion helps planners and commuters to react and plan their trips accordingly. Technological integration into the transportation system also benefits in predicting and analyzing the traffic to avoid congestion and gridlocks on the roads, thus making commuters’ life more enjoyable, stress free and comfortable.

The ITMS services include strengthening of four key areas of traffic management & road safety within the city:

Key Components of the System include:

Under this project, traffic junctions are being designed to bring traffic discipline and any violation to it punish offenders through its automated E-Challan system. Bhopal is the first Smart City to introduce automatic e-challans at 30 zero tolerance junctions. ITMS dispatch automatically E-challans through its E-Challan system to traffic rules violators, crowd control, criminal acts and riotous situation footages in the city which are captured and transmitted automatically to the ITMS command control center for initiating rapid action by the security forces. Bhopal smart city and city traffic police has launched website https://echallan.mponline.gov.in/ui/common.html for the online payment of fine, user can also pay challan fine through Bhopal Plus City App. To know whether one has been fined for any offence or not, one has to enter the vehicle number.

All traffic signs and public places of the city are being examined by as many as 300 CCTV cameras installed. CCTV footage being traced to the number of theft vehicles and road accident by taking video clips and capturing photographs. For vehicle theft vehicle, 100 incidents and 50-road accident have been captured so far.

RLVD is a mass surveillance system that automatically captures the image of vehicle violating the traffic rules. RLVD automatically captures images of vehicle from backside with license plate numbers and performs OCR (optical character recognition) on images to read the license plates on vehicles. It continuously monitors the traffic signal, and camera is itself triggered by any vehicle passing over the sensors at specified time after signal has turned red. Alerts are typically sent by mail or SMS to the owners of violating vehicles, based on review of photographic evidence. 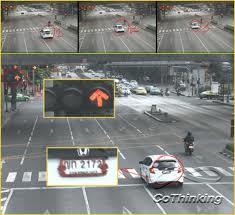 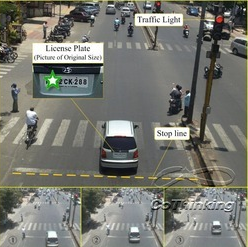 In many existing video surveillance implementations for traffic management, in India, a control centre staffed with monitoring personnel manually scan the output from the surveillance cameras to spot infractions and identify the vehicle. Automating this activity, using an Automatic Number Plate Recognition (ANPR) system will result in a much larger identification of traffic rule violations, within a shorter time-frame, and without having to increase number of monitoring personnel. The schematic below provides a typical system architecture of an ANPR implementation.

The project aims to provide total safety for bike riders. Recently although helmets have been made compulsory, people still drive without helmets. Bhopal has recorded second maximum number of road accidents deaths every year since 2011. The city turned out to be the most injurious for commuters in 2015. Road accidents in Madhya Pradesh claimed 9,758 lives in 2015 compared to 9,292 fatalities in 2,01,435 lakh two-wheeler riders, which includes 500-600 accidents every year out of which 300-400 are fatal. Road accident victims in Bhopal during 2015, included 417 males and 54 females. Due to rise in road accidents, it has now become necessary to generate a system to limit accidental deaths.

Key features of the No Helmet system are: 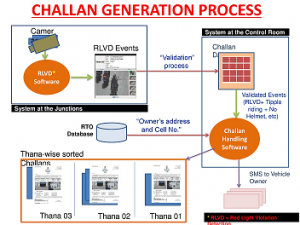 Under the RLVD systems, the team installed the ANPR cameras. These cameras also called as ‘evidence camera’ read signals. So when the signal turns red, it makes a virtual line called ‘stop line’. When a vehicle crosses the stop line in the red-light signal, it immediately captures the image of the ‘Red-Light Violation’ event. It captures the vehicle and signal location. The software is developed in such a way that it integrates with the Motor Vehicle Department’s website. Subsequently, challan is prepared from the collected data.

The offence can be detected via: 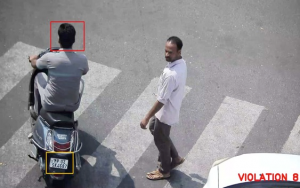 Driver wearing cap but not helmet 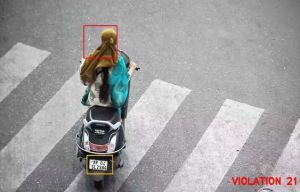 Driver wearing scarf but without helmet 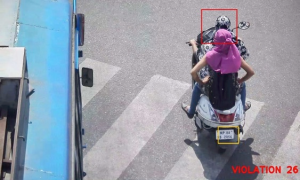 Driver with helmet but passenger wearing only scarf 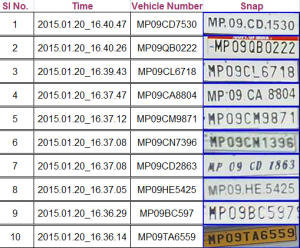 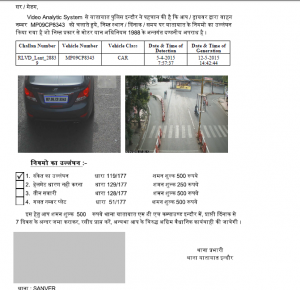 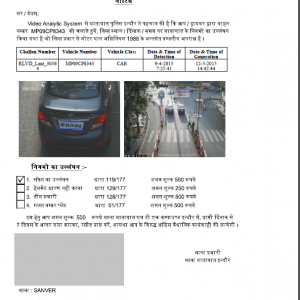